The Kontaki Design Gallery presents Thalassini Douma’s photographic exhibition entitled, “Lines”, which will be inaugurated on Thursday, April 19th at 19:30 and will last until Thursday, May 3rd.

Art historian Lorenzo Canova, mentions: ”…a research, connected to abstraction, prides itself, with the “Lines” cycle, where buildings’ quadrangular glasses geometrical waving, ascends again to its genesis, connected to the architectonic rationalism, in a direct dialogue with research of geometric abstraction of historical avant-gardes, like for example shows excellently Mies Van der Rohe’s Saegram Building masterpiece, in New York. In those photos, the metallic external trimmings, beside light and crystals, compose a highlight and reflection weaving effect, in a further expansion of the perspective that shuts and opens by an endless game of foreshortenings and flights that occupies the whole visible level, through its unsteady geometry, and insufficient spatiality…”

The black and white series “Lines”, together with the “Dissolving Travellers” series and the “Move In” series, are part of the “Journey in the Labyrinth” trilogy. The first series was created in New York, the second in Greenland, and the third in underground canyons of Arizona. This trilogy is a multi-level journey through desolate landscapes of nature and futuristic buildings of the metropolis. Is a long journey that connects, for the understanding of nature and urban space, as they dialogue through a system of correspondences and relationships. 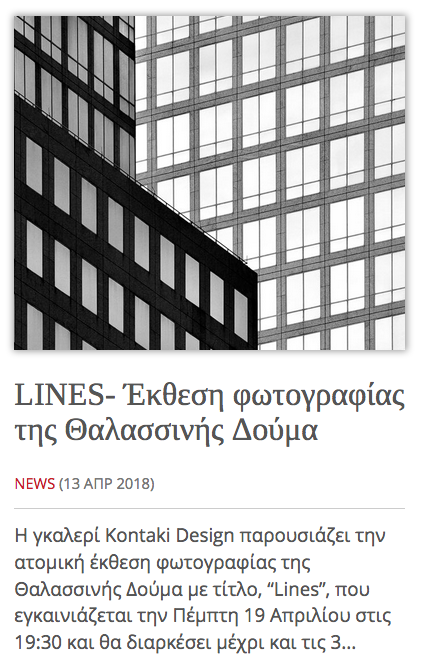